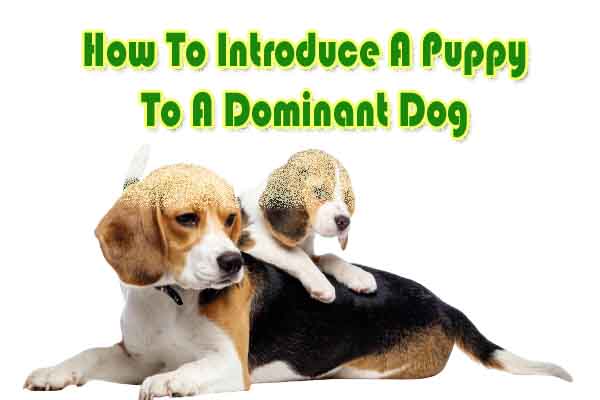 Introducing a puppy to a dominant dog can be difficult, but it can be done perfectly with patience and careful planning.

This article will share my experience of introducing a puppy to a dominant dog. This is not an all-inclusive guide for introducing any dog to another dog, but rather an account of something that worked for me and I want to share with you.

What is the Dominant Dog?

To answer the question of “what is the dominant dog?” one must first understand what dominance is? Dominance has been a heavily debated topic in dog training for many years.

There are many different schools of thought on the matter, but for sure: dominance is not a personality trait. It is not something that a dog is born with, and it cannot be determined by looking at a dog’s behavior. Dominance is a relationship status between two individuals based on communication and negotiation. It can be learned by any dog, regardless of breed or age.

So how do you know if your dog is dominant?

A dominant dog feels like they need to be in charge, and they will make sure that everyone around them knows it. As a result, they can be very pushy, even bossy, and challenging to live with.

A dominant dog may take charge of situations, such as meeting other dogs or people and try to control everything and everyone around them. While some people may find this behavior amusing or entertaining, it can be quite frustrating and challenging.

They may need to spend their time alone or in another room while being trained.

Dominant or fearful is their body language. Dominant dogs will often hold their head high and have their tail up and wagging.

On the other hand, fearful dogs will often cower or try to make themselves as small as possible.

Another indication is how vocal a dog is. Dominant dogs may bark or growl more frequently than fearful dogs.

The first step in introducing a puppy to a dominant dog is to assess the situation and see what kind of relationship currently exists between the two dogs. The dominant dog has the right of way in the home and is not afraid to assert its dominance. The owner may be fearful of the dominant dog. There may be some aggressive behavior towards other dogs, but not so much that it causes concern to owners.

To help ensure a safe and successful introduction, it is essential to establish rules and boundaries for both dogs. The dominant dog is allowed to be the leader and owner of the household. The submissive dog must follow the rules and be obedient to the dominant dog.

A dominant dog can be intimidating for a young puppy, so it is essential to provide structure and boundaries to learn how to interact with the new dog. Be Consistent: The more consistent you are with your puppy, the better they will become accustomed to their new role in the household. Consistency is essential for any relationship, especially between dogs. The more consistent owners are with the new puppy, the quicker they will learn their role in the household and be able to take on this new role.

The more consistent you are with your puppy, the better they will become accustomed to their new role in the household.

The Puppy Hates You phase can be difficult, so it is essential to be patient with your puppy and show them that you aren’t afraid of them.

Bringing a new puppy into your home is always an exciting time, but it’s important to do your research before bringing home your new furry friend. Not all puppies are created equal, and if you’re not careful, you may end up with a dog that doesn’t mesh well with your current pet.

Prepare Yourself Mentally and Plan:

Introducing a new puppy to a dominant dog can be difficult, but it can be a smooth process with preparation and planning. First, you’ll want to mentally prepare yourself and know that there may be some challenges. It’s important to be patient and consistent when introducing the two dogs and make sure that both dogs have plenty of space to roam and explore. If possible, try to set up an area where the puppies can play together without too much interference from the adult dog. Taking things slowly and being proactive can help ensure a successful introduction for all dogs involved.

Introducing a puppy to a dominant dog can be tricky. One way to do this is by choosing a neutral place. This could be a park, backyard, or even inside your home. When you first introduce the puppies, have them on leashes and ensure they are close to you. Let the dominant dog sniff and greet the puppy, but don’t let them get too rough. If the dominant dog starts getting too harsh, separate them and try again later. Finally, reward your dogs when they behave appropriately with treats or petting.

Here are furthermore a few tips on how to introduce a new puppy to a dominant dog:

Start by having both dogs meet in an outdoor area, like your backyard. This will give them plenty of room to explore and get used to each other’s presence.

Introducing A New Puppy To An Older Dominant Dog

Introducing a new puppy to an older dominant dog can be tricky. So here are a few things to watch out for:

Some dog owners might think that when they bring a new puppy into their home, the older dog living there will automatically take to the new addition and be best friends. But unfortunately, this is not always the case. Sometimes the older dog will become aggressive and attack the new puppy.

One reason is that the older dog may feel like they are losing territory or status in the home to the new pup. The older dog may also feel threatened by the new puppy’s energy and playful nature. And finally, some dogs don’t like change and may react negatively when something different comes into their lives.

If you have an older dog showing signs of aggression towards your new puppy, it’s important to nip it in the bud before it becomes a bigger problem.

My dog hates my new puppy

There could be several reasons why my dog hates my new puppy, but some of the most likely causes are that the dog feels replaced, territorial, or just plain jealous.

If my dog has been the only pet in the home, and I then bring in a new puppy, the dog may feel replaced and act out negatively. This can manifest as aggression towards the new puppy, refusing to eat or drink, or even eliminating in inappropriate places.

Another reason for dogs hating puppies could be related to territory. If the older dog perceives that the new pup is infringing on his space or taking away valuable resources such as toys, beds, or food bowls, he may become defensive or aggressive.

In some cases, jealousy may be to blame for dogs hating puppies.

Introducing a male puppy to a female dog

Introducing a male puppy to a female dog can be a daunting task. Therefore, it is important to ensure that the introduction is done correctly to avoid any altercations. Here are a few tips on how to properly introduce a male pup to a female dog:

How do you introduce a new puppy to an aggressive dog?

Introducing a new puppy to an aggressive dog can be a difficult task. One of the most important things to remember is always being aware of your surroundings and keeping yourself and the new puppy safe.

If you cannot safely introduce the two dogs, it may be best to seek professional help. When introducing the two dogs, the aggressive dog must be calm. Do not attempt to introduce them if the aggressive dog displays signs of aggression, such as growling, baring its teeth, or lunging. Instead, begin by having both dogs on leashes and sitting next to each other. Make sure that the leashes are loose so that neither dog feels threatened. Allow them to sniff each other and get used to their presence.

How do you introduce a puppy to an alpha dog?

Finally, it is important to allow both dogs to get used to each other gradually. You can do this by having them spend time near each other without interacting. This will help them get accustomed to each other’s presence.

How do you get an older dog to accept a new puppy?

One of the most common issues dog owners face is how to introduce a new puppy to an older, dominant dog. It can be a challenge, but it can be done with patience and some tips.

First and foremost, always keep safety in mind. Please make sure both dogs are on leashes so they cannot get too close to each other and potentially fight.

Start by having the older dog approach the new puppy slowly and allow the puppy to sniff her if the older dog is not interested, back off, and try again later. When the two dogs are comfortable enough around each other, begin feeding them near each other so that they get used to seeing and smelling each other while eating. Once they are relaxed, you can start playing short games together, such as fetch or tug-of-war.

How long does it take for a dog to get used to a new puppy?

When you bring a new puppy into your home, it’s important to establish dominance over the older dog. This can be done through several methods, such as obedience training, positive reinforcement, and establishing rules and limits.

If the older dog starts to show signs of submission or fear around the puppy, it will only further reinforce the puppy’s dominance. It’s essential to be consistent with your commands and punishment and remain patient while training your dogs. Feeding

When you have an older dog, it’s essential to be more careful about feeding. This is because feeding a senior dog can cause issues with their teeth and health. This is especially true for those who are prone to dental problems.

How do I stop my puppy from dominating my older dog?

To stop your puppy from dominating your older dog, you’ll need to establish yourself as the pack leader. This means being consistent with rules and providing positive reinforcement when your older dog follows the rules.

You’ll also need to be firm with your puppy, correcting him when he exhibits dominant behavior.

Be sure to provide plenty of exercise and playtime for both dogs, as this will help create a more balanced relationship between them. If necessary, seek professional help from a behaviorist or trainer to ensure that your dogs have the best possible connection.

Following these simple tips will help introduce a new puppy to a dominant dog much smoother. In addition, by being patient and gradually raising the two dogs, you can help ensure that each dog has a positive experience and develop a strong relationship. Finally, if you have any questions or concerns, don’t hesitate to contact your veterinarian.

5 thoughts on “How To Introduce A Puppy To A Dominant Dog? Ultimate Guide”