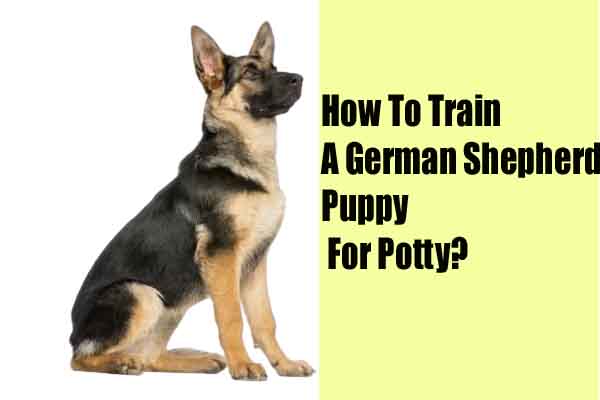 German Shepherds are the perfect breed for anyone looking for a loyal dog. They make great family pets and are also very good at guarding property. One of the key things you need to teach your German Shepherd puppy to do is toilet training. You can do a few things to help make this process as easy as possible.

One of the most important things you can introduce your new puppy to is toileting early on in his life. If he is used to going potty outside, he will be much more likely to go when he needs to in the house too.

Read More: How To Keep A Dog Calm While Grooming?

You can use a potty pad or take him out when he has an opportunity. If he doesn’t go right away, don’t force him; try again later when he’s more settled in.

Reasons Why Potty Training A German Shepherd Puppy Is Important 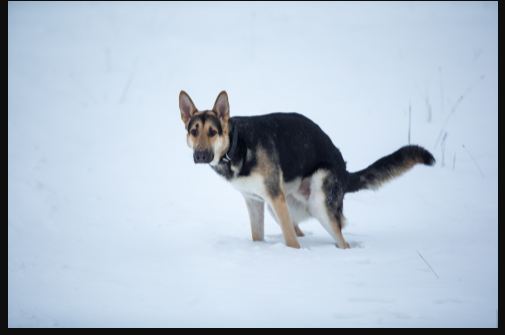 Potty training a German Shepherd puppy is important for a few reasons.

First, they are often very active and need to go potty frequently.

Second, if not properly trained, a German Shepherd may begin marking in inappropriate places, such as your house or car.

Third, accidents can be costly to clean up.

Fourth, German Shepherds are very intelligent and can quickly learn how to use the potty if properly introduced at an early age.

Finally, having a well-trained German Shepherd makes them much easier to live with – both indoors and outdoors.

How To Properly Crate Train Your Puppy And What To Do When They Have An Accident? 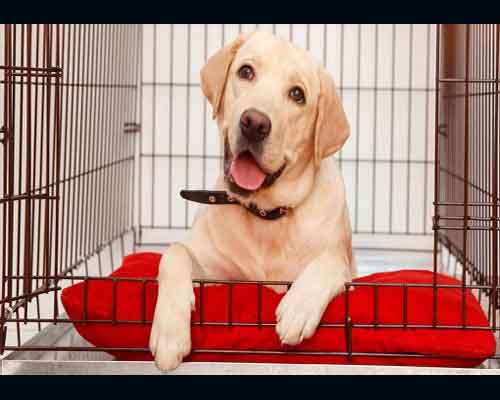 How To Train Your Puppy To Go Potty Outside? 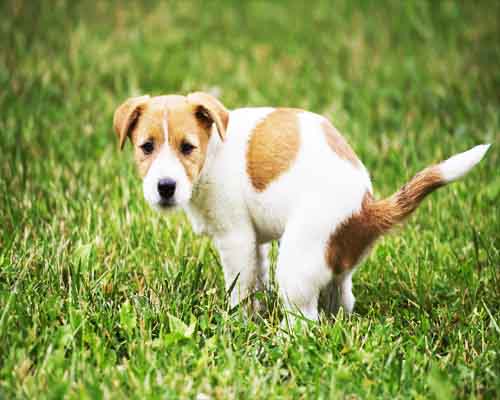 Puppies learn quickly when it comes to toileting. With a little bit of patience, you can have your puppy potty trained in no time outside!

Here are some tips to help get the process started:

Puppies learn best when they are constantly engaged with their surroundings. This means that potty training your GSD puppy indoors should be done to mimic how they would learn while outdoors.

Here are some tips for successfully potty training your GSD puppy indoors:

Puppies will learn better and faster if their daily activities are predictable. Start by setting a specific time each day for pottying, and then stick to it! Once your pup knows what to expect, it will be much easier to enforce the pottying rule outside.

When your pup eliminates in the designated spot, give them positive reinforcement such as praise, treats, or toys. The more you reinforce your pup, the easier it will be to train them to eliminate on command.

It is very important to set up a schedule that you and your pup can follow. You will want to make sure that your pup is prepared for their activities, including the pottying schedule.

It will take time to train your pup, which can be frustrating at times. Just remember that consistency is key! 5. Be prepared for accidents. If your pup has an accident during the pottying schedule, do not punish them for the mistake!

How Long Does It Usually Take To Potty Train A German Shepherd Puppy?

However, it is possible to successfully potty train a German Shepherd puppy with patience and consistency.

The average time it takes to potty train a German Shepherd puppy ranges from about eight weeks to 12 weeks but can be longer or shorter depending on the individual dog’s temperament and how well they have been introduced to the toileting process.

How Hard Is It To Potty Train A German Shepherd Puppy? 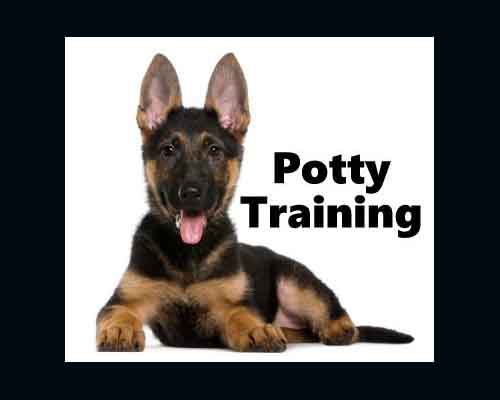 Many people believe that potty training a German Shepherd puppy is very hard, but this is not necessarily true.

There are many different ways to potty train a German Shepherd puppy, and it can be done successfully with plenty of patience and commitment. At the same time, some puppies may take longer than others to learn to go on cue; with patience and consistency, most German Shepherds will eventually learn how to use the potty.

How Do I Stop My German Shepherd Puppy From Peeing In The House?

German Shepherds are one of the most intelligent dog breeds, making potty training a very difficult task.

Many German Shepherds find it difficult to learn where to go to the bathroom with so much intelligence. This could be especially troublesome if your puppy were not raised in a house with a regular pattern of going outside.

In addition, German Shepherds are very active dogs and will often have to go on short walks, leading them to visit the bathroom outdoors. If you’re having difficulty potty training your German Shepherd puppy, there are several things that you can do.

One approach is to make sure that you establish a routine for your puppy. When he wakes up in the morning, take him out for a quick walk around the block before breakfast. Then have him stay inside while you eat breakfast and after lunch. Please give him a couple of treats for coming when he’s called.

When you’re at work, take your puppy with you. If you have a lunch break, take him outside and give him some water. Then give him some food when you get back from lunch.

At What Age Should A Puppy Stop Using Pee Pads?

Puppies are cute, cuddly creatures, and many people feel inclined to keep them as puppies indefinitely.

However, most puppies do not need to use pee pads past six weeks old. By then, they have developed good bladder control and can hold it in for a while when needed. If your puppy does start using pee pads at an earlier age, there is no harm done as long as you take them out regularly and give them opportunities to soil where they want to soil.

How do I potty train my 8 week old German Shepherd puppy?

Puppy potty training can seem like a daunting task, but it can be completed with patience and plenty of positive reinforcement.

Here are some tips on how to potty train your 8 week old German Shepherd puppy:

Is It Better To Have A Male Or Female German Shepherd?

Choosing a German Shepherd puppy is not an easy task. Many factors to consider, including size, personality, and training needs.

But one of the most important considerations is whether you want a male or female German Shepherd.

There are pros and cons to having each gender, so it’s important to weigh all the options before deciding.

Here are some key points to consider:

Pros Of Having A Male German Shepherd:

They’re typically bigger than females, making them better suited for protection or athletic tasks like running and jumping. Male GSDs tend to be more active than females and have more energy.

Cons Of Having A Male German Shepherd:

Males can be more challenging to train, as they often have stronger personalities. They are very territorial and require a lot of exercise. They also have high energy levels, so they can be difficult to manage when you have other pets or children in your home. In the United States, German Shepherds are one of the most popular breeds.

Pros of having a female German Shepherd:

Female German Shepherds are typically more obedient than their male counterparts, making them great family pets. They’re also known to be very friendly and loving, making them perfect for people who have children or other dogs in the home. Additionally, females typically have shorter hair than males, which makes them less likely to get dirt and debris stuck in their fur.

Cons of having a female German Shepherd:

Females GS can be more challenging to train, as they often have stronger personalities.

If you’re looking for an all-around good dog, one that s loyal and will always be your best friend, then the German Shepherd may be right for you.

How Do I Train My 8 Week Old German Shepherd Puppy? 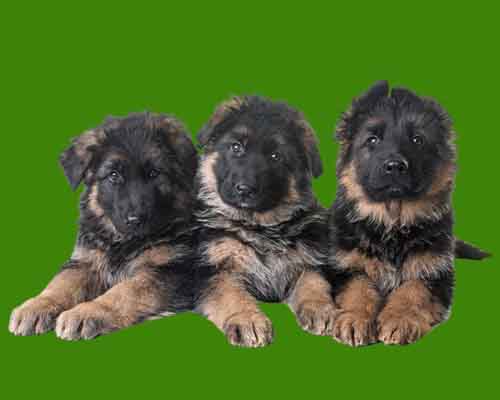 When it comes to training your new German Shepherd puppy, the earlier you start, the better! Puppies learn best through positive reinforcement, so begin training as soon as possible.

Here are some tips for getting started:

How Do I Bond With My German Shepherd?

This is a question that many people have and is difficult to answer. A good way to start bonding with your German Shepherd is by playing together.

You can play fetch or other games together and give your dog lots of attention. You should also socialize your dog as much as possible, which means taking him out for walks, going to obedience classes, etc.

If your dog is well adjusted, you can start teaching him commands. This will help build his confidence and teach him that tasks can be completed successfully.

To ensure that your German Shepherd learns the right way, you need to be patient and consistent.

2 thoughts on “How To Train A German Shepherd Puppy For Potty?”