Why Does My Dog Bury His Head In Me? 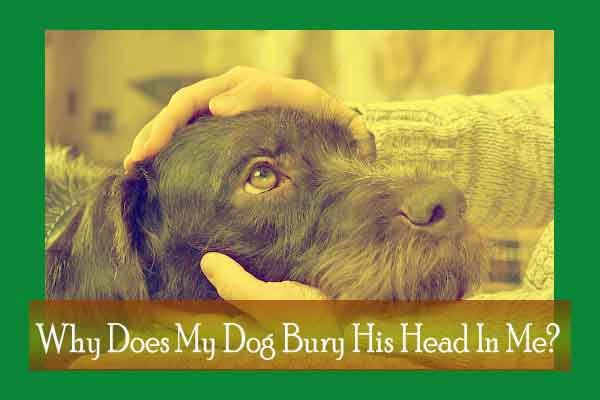 Do you ever wonder why your dog likes to bury his head in your lap? Or why he always seems to want to be close to you? It turns out there is a scientific reason behind these behaviors! Dogs have an instinctual need to be close to their pack leader, which is why they exhibit these behaviors around humans. This blog post will explore the science behind canine behavior and discuss why dogs behave the way they do. We will also offer tips on how you can better understand and interact with your dog.

There are a few different reasons why your dog might bury his head in you. One possibility is that he’s trying to show you that he trusts you. Dogs often bury their heads in the chest of their owners as a way of showing affection.

When looking at why a dog may be burying its head in you, please consider the fact that there may be a difference between a dog that has always tried to bury its head in you and one that has suddenly adopted this behavior.

This is probably the main reason why a dog will bury its head in you. The dog may feel cold or uncomfortable because of the environment or anxiety. In either case, burying its head in you will help the dog feel better.

Dogs love attention, and they will do a lot to get their owners’ Attention. It could be that your dog is burying its head in you because it wants your attention.

Dogs often show their love for their owners by burying their heads in them. This is a sign of trust and submission. So if your dog is burying its head in you, it could be that the dog loves and trusts you.

If your dog is afraid of something or someone, it may bury its head in you as a way of seeking protection. This is a natural response for dogs, and you should try to comfort your dog if this is the case.

Dogs are known to be very empathetic, and they may bury their heads in you out of empathy. For example, if you are crying, your dog may bury its head in you as a way of comforting you.

Dogs may also bury their heads in you as a way of submitting to you. This is usually seen in dogs not the most dominant in a pack.

Also, you may notice that your dog buries its head in people other than yourself.

Bonding with your dog is a way to show affection and increase trust. You may notice that your dog will bury its head in you when it’s tired, sleeping, or just taking a nap. This is because the dog feels safe and secure around you.

Dogs may bury their heads in you as a way of seeking Permission to go into the next room or do something. If you don’t like this behavior, then try to stop it by ignoring the dog when it does this.

A dog may bury its head in you if it’s afraid of something. This is usually seen in dogs that have had a traumatic experience. If your dog is worried, try to comfort it and make sure it feels safe.

Dogs often bury their heads in people to show that they want human contact. If your dog is lonely, you should spend more time with it.

Why does my dog tuck her head under my arm?

This is a form of tail-wagging called “circus tucking.” It’s often seen in dogs who are overstimulated, frightened, or frustrated. It is sometimes accompanied by whining or another nervous body language.

What does it mean when a dog buries his head between your legs?

A dog burying his head between your legs usually means he’s trying to get closer to you and show you some love. It’s a sign of affection similar to when a person puts their arm around someone they care about.

What does it mean when a dog nuzzles their head into you?

It means that the dog trusts you and feels comfortable around you. Dogs will often nuzzle their heads into the crooks of their owners’ arms, indicating that they feel safe and loved.

Why does my dog put his head on my face?

It’s comforting to your dog for some reason, maybe because it reminds him of his mother licking him or nuzzling against him.

Animals may sometimes assume postures that at first appear to be submissive but serve as an expression of their happiness and contentment. – Amy Sutherland (The Washington Post)

Why does my dog push his head into me?

Dogs are instinctively roughhoused with their owners, not just to get Attention but also to establish dominance.

The dog has likely learned this behavior from other dogs they grew up with. Some dogs do this to indicate they want to play, while others might feel anxious and seek reassurance – like a human seeking contact while feeling shy.

The nervous head-butts could also signal that it’s time for his dinner; some researchers found that experimentally induced hunger in dogs led them to push their heads into researchers under any conditions.

Why does my dog push his head into my chest?

One theory is that dogs push their heads into their owners’ chests because they are smelling their scent glands located in the armpits to learn more about them. Another possibility is that they are looking for a sign of submission in order to figure out who is in charge.

Why do dogs rest their chin on you?

Dogs may rest their chin on you as a way of showing dominance or submission. It can also be a sign of affection.

Is Head Burying A Bad Thing?

Burying one’s head in the sand means willfully ignoring a problem until it goes away. Swallowing one’s pride, unrealistically hoping that issues will get better on their own, or being concerned with how others perceive you are all examples of “head burying.”

It is human nature to bury your head in the sand when things get more complex than you anticipated, but the reality is that the problem will still be there once you resurface. For example, say you quit your job because it took too much time and energy, but then have trouble finding a new one. Pushing through this challenging period might seem daunting initially-but. Sometimes dealing with what claws us down is just what we need for bigger successes later on.

What Can You Do About Head Burying?

Strategies for preventing head burying in children include limiting their time outside when a lot of pollen is in the air or getting them to shake their hair after playing outside.

Below are some helpful suggestions for dealing with head-burying:

1) Discuss other ways to get attention, such as talking, drawing pictures, and exploring new activities

4) Ask what behaviors happen at school and work to reinforce the difference between these settings and home.

5) Help the child develop a plan for what they will do when they urge to bury their head. This may include taking a break, deep breathing, or counting to ten.

Hi! I am Faraz Jameel. I am a pet lover with extensive knowledge of all kinds of animals. After completing my Masters's Degree in Animal Sciences, I started writing about my pets and the pet industry. My blog quickly gained a following: I provided accurate, honest advice on everything from choosing a new pet to training tricks, health, grooming, etc.

1 thought on “Why Does My Dog Bury His Head In Me?”

As an Amazon Associate, I earn from qualifying purchases.

Disclosure: This website is a participant in the Amazon Services LLC Associates Program, an affiliate advertising program designed to provide a means for sites to earn advertising fees by advertising and linking to amazon.com.

We provide extensive support for most hours.

2022 All Rights Reserved By Doglable.com